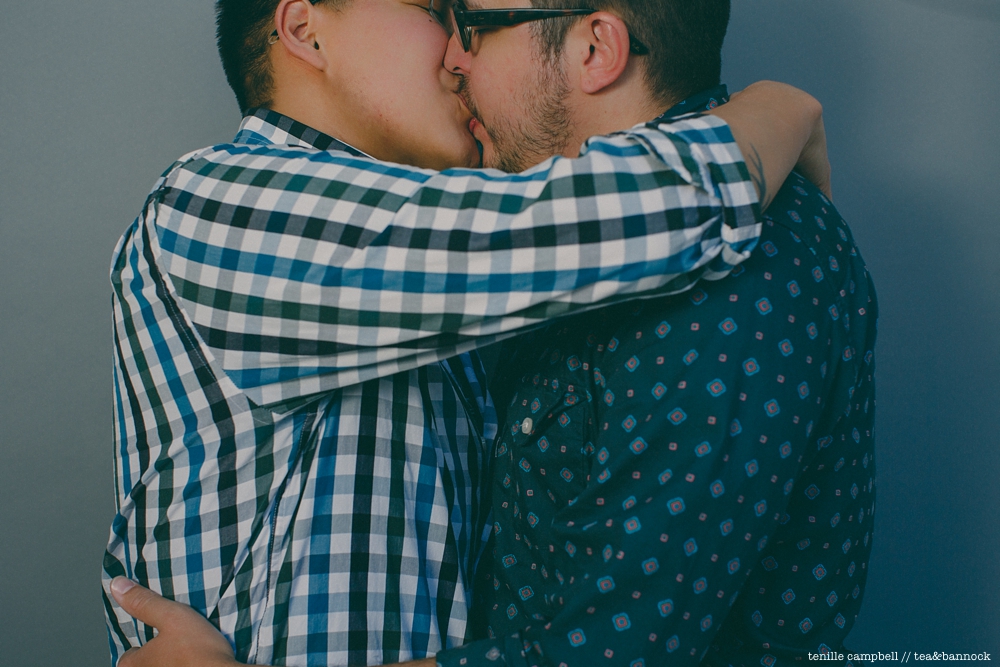 “Just make out a little. Trust me.”

We’re all giggling, and trying not to, as my friends Jack and his partner James, snuggle in. Jack is, by nature, not an overtly PDA kind of guy. It’s only because he trusts me, and knows me, that’s he’s willing to be part of this.

More laughter. It’s an odd feeling watching people make out. I can’t imagine what they feel like, with my flash and the click of the camera, with my helpful/not so helpful suggestions coming out. It’s the first official studio day for my new art series, #KissingIndigenous. I’m gathering my adventurous friends after a Facebook post asking them to make-out in front of my lens.

I’ve spent the last few years working almost strictly with Indigenous people as I grew my business. I’m Dene, I’m from the North, and it’s those stories and people that I want to photograph. And it’s been amazing. A lot of fun. A lot of laughter, and joy, and happiness.

And as I present these images of real, honest-to-Creator, authentic Indigenous People, I am well aware of how visual stereotypes still run rampant in mainstream culture. I see it every Halloween when the Squaw and Warrior and Indian Princess costumes come out.

I see it every summer when Coachella and other festivals start to emerge and some hipster thinks their headdress is so “on fleek”. I see it when small town communities and huge corporations refuse to accept the fact that their Indian mascots are racist. I see it when Indigenous roles in blockbuster movies only feature Indigenous people as traditional, contact-era Indians.

Where’s my world traveller, living in backpacks and instagram shots? Because he’s here.

We have the artists, the actors, the storytellers, the accountants, the café owners, the chefs, the hockey players, the basketball players, the CEO’s, the tech geniuses. We have everyone under the sun, doing the same jobs and cultivating their life experiences, but absolutely next-to-zero current representation in mainstream media.

So it’s frustrating. It’s aggravating. Visual representation, when left to outsiders, means we are being perceived through someone else’s eyes and experience. We are viewed as other. And I am well aware of when I shoot my Cree friends kissing, my Metis bro kissing, my Dene cousin putting on lip gloss and leaning in, that I am taking those outdated visuals and smashing them.

More importantly, I am reclaiming our sexual and sensual identity.

There is so much baggage and shit that comes with being an Indigenous woman. And this isn’t the place to step into that, but I’m aware of that. I’m aware that a woman is supposed to be discreet. To hide her sexuality. Because if you don’t hide it, you’re “asking for it.”

I’m well aware that a man is allowed to be promiscuous, in fact, is expected to sleep around, and he is not shamed for it. But if a woman does, those tongues start talking and those friendly laughter turns turn cruel, because what kind of woman sleeps around.

I want to photograph Indigenous men and women and people who hold their selves to a different standard. Who look and see their partners, and respect and honour them.

And we’re starting. It’s a start. It’s something small, just a touch of sexuality. Just a touch of sensual. And it makes us laugh, and blush, and hopefully smile. It reminds of us of our first kisses and crushes. Of sitting around on old couches and holding hands, waiting for them to make the first move. Of asking Setsune (Grandma) about his family and making sure he wasn’t your cousin. Eeeee.

And it’s a start that inspires others, as seen by this work with Aura (Haudenosaunee and Métis woman), a talented multi-media artist. She contacted me and asked if she could floralize my work, and I was like hellllsss yeah. 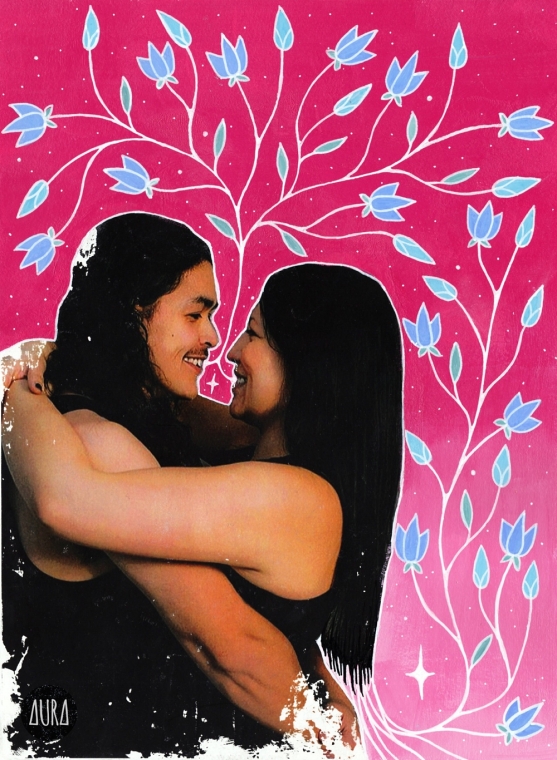 5 thoughts on “Just Make Out a Little”