The moment I competed in Dene Games I became instantly hooked on the games. I remember being a young pre-teen around 12 years old, practicing with my friends in the community hall of Fort Providence.   We would practice different techniques to master the stick pulls that was covered in Crisco lard, we would do the finger pull until the muscles in our forearm would give out and I would sit patiently listening to the elder’s describe the hundreds of different hand game calls… it was then, that I discovered my passion for the Dene traditions, culture and the Dene Games.

Whether you compete in the Inuit or Dene games, there is one common ground, it’s all about sportsmanship and respect. All the Inuit and Dene games have a story or reasoning or purpose behind it being played; a connection to the land and the way our ancestors use to live, and it was used to prepare us for different ways of hunting. It was practiced to keep our bodies fit to travel long distances and in harsh weather conditions.

I feel that it is so important to understand and try to connect with our roots when playing the traditional games. Each region in the North has similarities in the stories and history behind the games but generally it was used for the same purposes no matter where you lived; to survive on the land.

Inuit and Dene; prepared families for a hard life on the land, the games were used to develop agility, strength, endurance and resistance to pain.

The Dene games were developed to gain hunting skills, used to build strength in adults and children to help around the camp, and to build endurance to travel on the land and rivers, as well to build resistance to pain.

The Inuit games were developed to help the Inuit survive in the harsh weather conditions while traveling from camp to camp. The Inuit followed the food source, either on the land or on the ocean. These games were very important to the Inuit people as they prepared children for life out on the land and for successful hunts.

Today the games are practiced to keep the tradition alive through community events and competition; it also can connect one with their culture. I personally feel that it has given me so much insight and respect for the way of life my ancestors use to endure and has given me a sense of belonging with my dene culture and history. It has taken me to many places I couldn’t even imagine possible.

Below I have listed a few of my favorite Dene and Inuit games; I’ve traveled far and wide demonstrating the Dene games to old and young all over Canada and parts of USA. If you have any questions or would love to know more about the traditional games, I’m always willing to pass on knowledge and stories of my experience practicing the games.

Finger pull is a Dene Game. It was played to strengthen the fingers to prepare the dene people for fishing season. It was very important to the Dene to be a good fisherman to provide for their families and dog teams.

Fish would often be carried from the shore to camp by inserting the middle finger into the gill area of the fish. This required a lot of strength in the arms and fingers. In order to maintain their strength, the finger pull game was played. 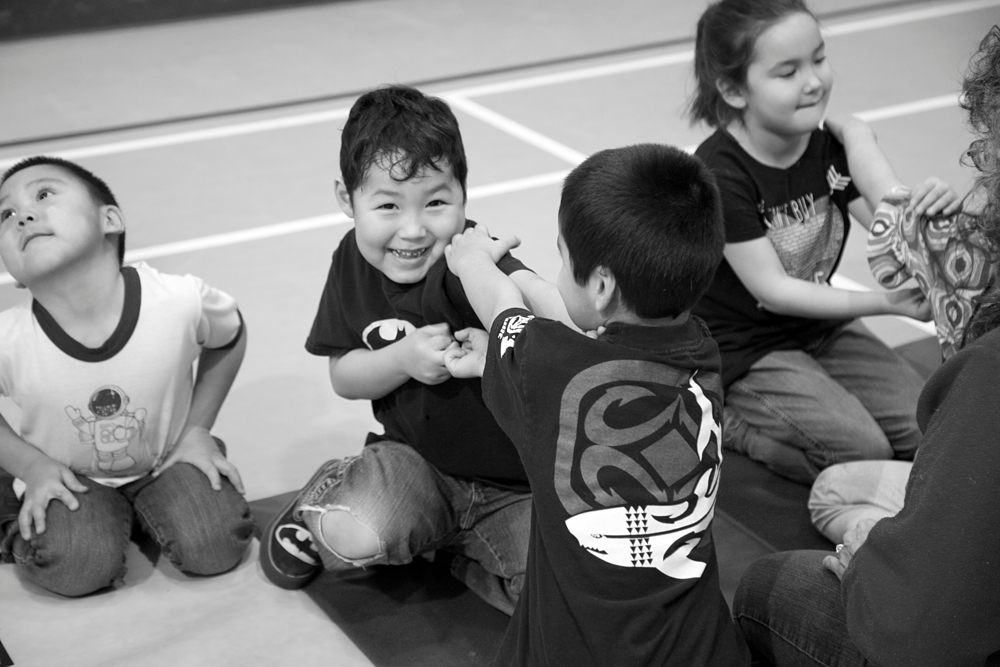 Children from Toktoyatuk learn the motion of Finger Pull

Snow snake is a Dene Game. It was used as a hunting tool to kill caribou during the times when there were no guns. Often the caribou would be found lying in the snow-covered lakes. It was during that time the dene hunters would sneak out onto the lakes, and throw their spear like tool through the snow and into the caribou’s stomach.

Dene hunters would practice their throwing techniques with the spear or as it is called today, the Snow snake.

The Stick Pull game is a Dene Game. It was used to help strengthen the hands and wrist in preparation for fishing season. Often large fish swam along the shores of the rivers enabling the Dene easy access. They would simply reach down and grab the fish near the middle of its back and throw it up on the land or shoreline.

Fish are often slippery to hold and being able to grab heavy fish out of the water is difficult. So in order to remain strong, Dene men would challenge each other in the stick pull. Traditionally the dene would use bear grease but today we use Crisco lard to grease the stick.

Children try out Stick Pull for the first time.

The One-foot High Kick is an Inuit Game. It was one of the indoor games that were traditionally played during the winter months, especially when several groups met during the dark and short days. All of the Inuit kicking games were developed to be agility games; it was made to help the Inuit people deal with the different types of land conditions during the changing seasons. They were also played to develop hunting skills.

The One-foot high kick is considered to be one of the most difficult and most exciting Inuit game.

Old and Young pratcising the One-foot high kick in Tuktoyatuk

The Airplane is an Inuit Game. It was developed to build strength and endurance for long days of traveling, to build survival skills, and to keep up with the dog teams.

Today it is practiced in gymnasium’s, usually the person with the strongest core and muscles must hold themselves up to be straight like a board, while 3-4 others lift their legs and arms. Whoever can make it the farthest around the gym, is declared the winner.