For the past several years, I’ve been fortunate enough to organize, support, and witness artists of all kinds fulfill their visions within the walls of Glyde Hall (the building that houses the Walter Phillips Gallery and visual arts studios and facilities) and across campus at Banff Centre for Arts and Creativity. This includes coordinating details of the annual Indigenous Visual + Digital Arts Residency–a program that holds a special place in my heart. This program gathers Indigenous artists and cultural practitioners from all over the world who are connected by a love of creating, investigating, and sharing ideas pertinent to contemporary Indigenous concerns. The most recent iteration of this program ran from November 7-December 9, 2016, and ended only ten days ago. Though there are many moments worth mentioning that happened over the course of the five-week program, I would like to share the following two happenings that I found exceptionally affecting: 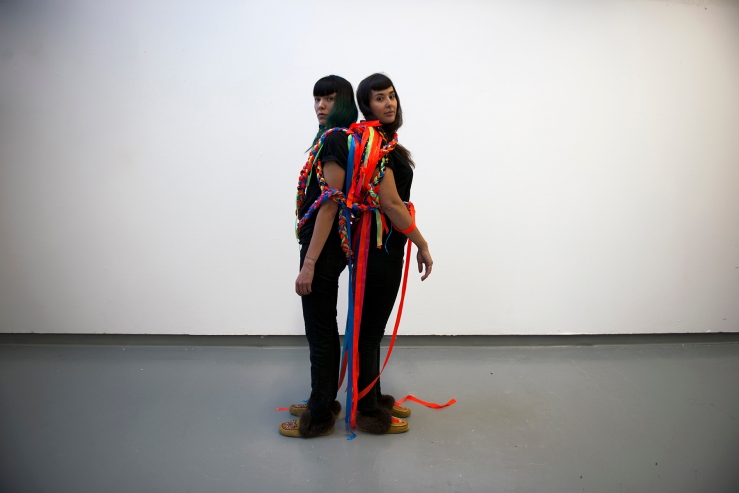 People are crowding into the Lighting Studio in Glyde Hall to watch the performance. Jeneen and Tsēma stand back to back, dressed in all black except for their moccasin clad feet, and wrapped in one long braid made of their own hair, rope, and colourful flagging tape. A hush falls over the crowd as we eagerly await the performance to begin. Slowly, they turn to face one another, unwinding the rope that is their hair connecting them to each other, something like an umbilical cord. Silently they begin to make a second braid, each starting from their own scalps and bodies, to eventually join in the middle, making one more long braid of hair, rope, and colourful flagging tape. 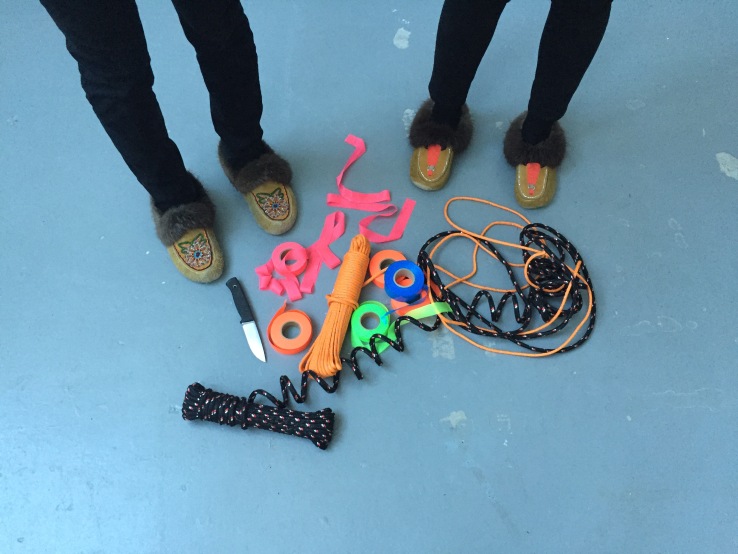 As I watch this action, I think of my sister and how we have braided each other’s hair many times, and how as children our mother washed and combed and braided our hair for many years, and how my father even combed and braided my hair when my mother was not around. Hair is sacred. Hair is an extension of our nervous system and an important part of our sensory perception. Hair is an important part of our identity. Hair has personal, spiritual, and cultural significance. The gesture of braiding ones hair suggests tender loving care and attention, cleanliness and wellness. The way we care for ourselves, reflects how we care for each other, and our environment.

But intertwined within their black braids is neon coloured flagging tape–the kind of you see marking forests for clear cutting–and rope made of fabricated materials. The contrast of colours and materials makes me think of Bruno Canadien’s Freedom Fighter paintings. His colourful assemblage art works assert Indigenous presence, resistance and sovereignty, and protest the encroachment of industry on First Nations lands. Jeneen and Tsēma’s performance share a similar tenet, while acknowledging the complex relationships that exist between industrial resource extraction enterprises and affected communities, First Nations and Canada.

Jeneen and Tsēma demonstrate the tension that exists between opposing interests by swinging their long braids around and around, inviting the audience to play double dutch. No one wants to jump in for fear of landing on one of the braids and ripping out their hair. Eventually, the game’s risk is reduced to only one jump rope. After watching a few brave participants jump in and out of the swinging hair rope, I summon my courage to jump in and out, somehow managing not to land on their hair. I feel awkward and heavy and nothing like a child. The use of their hair and materials for what seems to be an innocent game becomes distorted, the audience becomes implicated, and anxiety and fear are created. 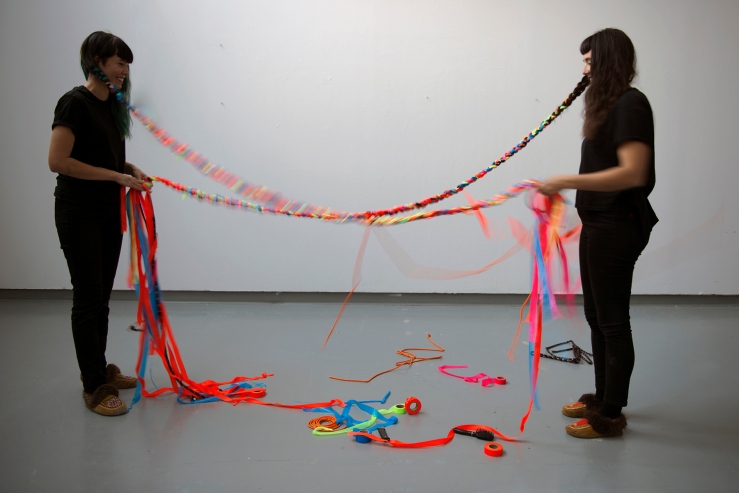 This performance questions our relationships to each other, to place, to our sense of self. It questions our relationships and responsibilities to the land and to our respective communities. What is an acceptable level of risk when allowing industrial development to happen on pristine lands–on Indigenous lands? What are the implications of our choices, our resistance, our compliance? What are the consequences of our choices? How do we listen? In what ways are we entangled and implicated into decisions outside of our control? How do we deceive each other, our selves? What do we truly know to be true? What does the future hold? Is it possible to restore and repair the damage already done? The performance ends by them cutting the braids with a knife, leaving the audience with conflicted emotions. There is no resolution. 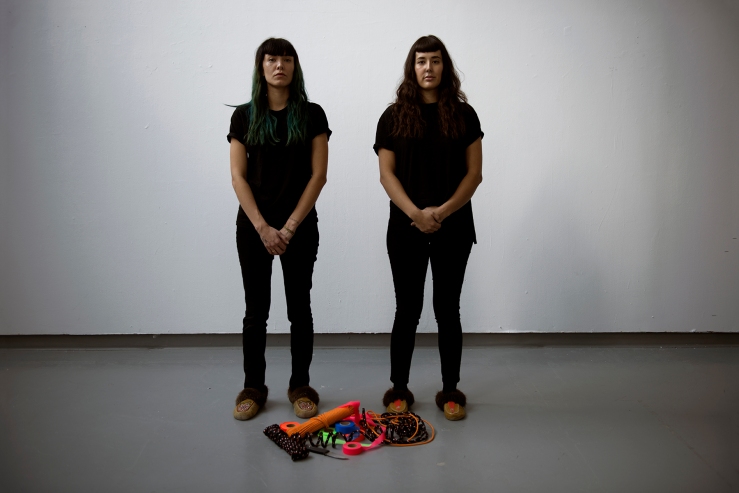 Lindsay Dobbin’s work is often site-specific and furtive. They collaborate with nature, creating with found materials, and playing with sound. Over the five-week residency, I heard murmurs about Lindsay’s “other studio” in the woods, but it wasn’t until the second last day of the program that they led a guided walk to the Listener Ship. A small group of us quietly walked with Lindsay through the snow covered forest, following their tracks from previous outings–the mark making revealing something like a map to our destination.

It was a blue bird day, the sun shining bright despite the frigid cold. After weaving through the trees for a while, we eventually arrived at the Listener Ship–a small hut made of gathered and arranged deadfall from the forest behind Glyde Hall. The structure sits upon a bluff that overlooks the Bow River–looking west, the Bourgeau mountain range can be seen upstream–looking south one sees Bow Falls tumbling directly below, while the Banff Springs Fairmont Hotel sits across the river reminding visitors of Banff’s colonial history. The view is breath taking–sublime. My breath is visible as it leaves my body. The forest is quiet, yet the roar of the falls is relentless.

Before entering the fort, Lindsay talked about their process of making with the materials “offered by the forest” and the quality of “embodied listening” as they determined the placement of each piece of wood–they talked about their return to childhood and their desire to connect more deeply with the land, and how the marks of their footsteps in the snow became a record of the process. They then invited us inside the fort where we huddled close, shoulder to shoulder, sitting on the ground, filling the ship with our puffy parkas, toques and scarves, rosy cheeks and smiles, breathing each other’s cloud breaths. For a moment, I felt like a child, recalling a sense of imagination, wonder, and play. Listener Ship is an ephemeral sanctuary for listening and communing with the land.

These two happenings are thematically tied. Childhood experiences and perceptions contrast adult realities and responsibilities. Both happenings have a touch of nostalgia and bittersweetness. During Sinuosity I felt a mix of excitement remembering the joy of jump rope as a child, but also fear as I was aware of the consequences if I landed on their hair and the metaphor their performance conjured… and as I approached Listener Ship, an idyllic setting for a fortress for little (and big) people, I was still very aware of the colonial history of this place and the unresolved contested territories across these lands. Despite these conflicting internal experiences, I do believe it is important to nurture our innate wonderment of creation, and to cultivate a sense of gratitude towards that which is sacred. It is these qualities that help us to love and build healthy relationships–to care for where we come from and our families, the water and land–to pay attention, and tread mindfully as we move forward.

Lindsay Dobbin is a multi/interdisciplinary Métis artist, musician, curator and educator who lives and works on the Bay of Fundy, Canada. Their ecocentric, place-responsive practice includes media art, performance, sculpture, installation, social practices and writing, and is invested in and influenced by Indigenous epistemologies and cultural practices, such as drumming. Beyond their solo creative practice, Dobbin is also an active artistic collaborator, and have worked on projects with musicians, sound artists, dancers, visual artists and filmmakers. Their work has been presented and reviewed nationally and internationally, and they have received both provincial and federal grants. In addition to their art practice, they are also a passionate educator–employing music, sound, play, improvisation and engagement with the environment as tools for self-awareness and building community.

Jeneen Frei Njootli is a Gwich’in artist and a co-creator of the ReMatriate collective. She has worked as a fashion designer, performance artist, workshop facilitator, crime prevention youth coordinator and has both lived and exhibited across Canada. Frei Njootli’s practice concerns itself with Indigeneity-in-politics, community engagement and productive disruptions. She is currently a grateful, uninvited guest on unceded Musqueam territory, pursuing a Master of Fine Arts Degree at the University of British Columbia.

Tsēma Igharas (formally Tamara Skubovius) is an interdisciplinary artist and member of the Tahltan First Nation. She studied Northwest Coast Formline Design at K’saan (2005/06), has a Bachelor of Fine Arts from Emily Carr University for Art + Design, Vancouver (2011), and Masters of Fine Art from Ontario College of Art + Design University (2016). Tsēma has shown in notable group shows, Interweavings (RAG 2014/15), Culture Shift, Contemporary Indigenous Art Biennale in Montreal and Luminato festival in Toronto (2016). She is currently showing her solo exhibition, Ore Body, in the vitrines at Gallery 44 for Imaginative Film Festival in Toronto. Tsēma graduated from the Interdisciplinary Master’s in Art, Media and Design program at OCADu showing her thesis work, LAND|MINE that connects materials to mine sites and bodies to the land.

Angela Marie Schenstead is an artist and writer, originally from Saskatchewan, and a member of One Arrow First Nation. She earned a Fine Art Diploma from Grant MacEwan University, Edmonton (2003), and a Bachelor of Fine Art in Ceramics from Alberta College of Art + Design, Calgary (2007). She has been a resident artist at Medalta, Medicine Hat (2007); Bruno Arts Bank, Bruno (2011); and Common Opulence, Demmitt (2015). Her art work can be found between the pages of kimiwan ‘zine (issues one and seven), and the online exhibition Attesting Resistance curated by Logan MacDonald (2013). Her work was included in the group exhibition Indigeneity, The Works Festival (Main Tent), Edmonton (2012); and she independently curated FIRE which featured works by Brenda Draney and Jewel Shaw, Stride Gallery, Calgary (2012). She has written texts for Contemporary Calgary, Art Gallery of Alberta, and Studio Magazine. She is currently based in Banff, where she has been a team member of Visual + Digital Arts at The Banff Centre since 2007. She is also an avid hiker, yoga practitioner and instructor, and is happiest walking in the bush or swimming in fresh water.