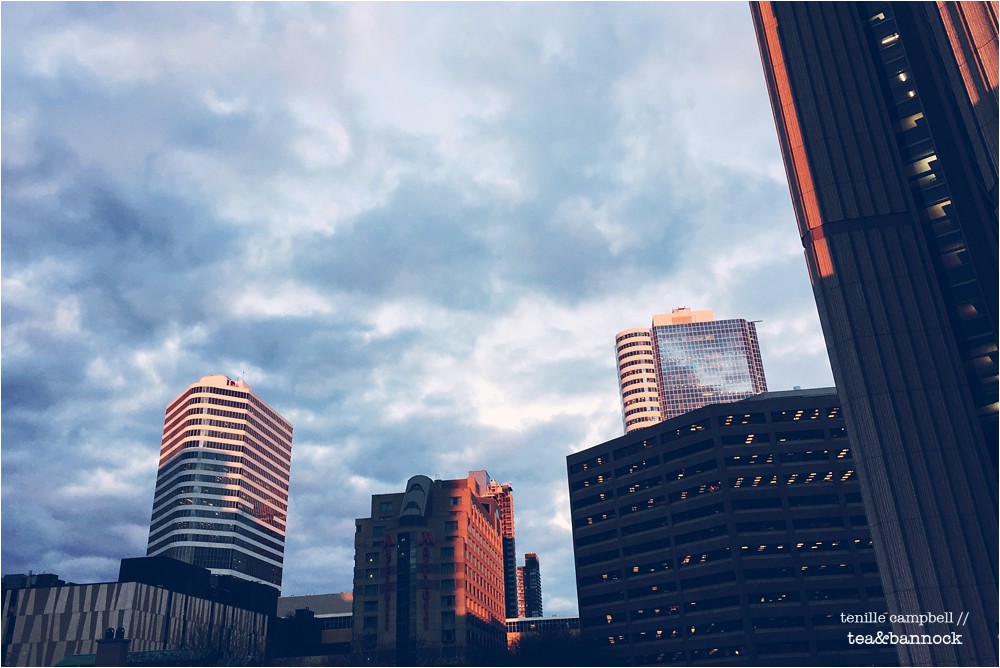 Toronto, why you gotta do this me way?

It was my first “official” visit to Toronto. My first time staying in these urban lands, not just passing through to different reserves and communities. And it had been amazing, so how did I end up here – suffering from that over indulgence of alcohol and greasy foods, sitting on a black suitcase as it rolled down the street in Chinatown, with me on it, too sore to even put my foot down as a brake…?

I got a story for you.

I fell in love in Toronto, for a quick minute.

I fell in love with being surrounded by people of culture. People whose language and stories swelled around us, and for once, I felt like an outsider but also an insider, safe in the confines of dragon statues and Chinese writings while staying in a hotel in Chinatown. With peddlers selling jade statues on the sidewalk, crowds around them as they hawked their wares. With watching the crowds of high school teens jostling for position on the sidewalk, loudly laughing, fearless and invincible.

I fell in love with latte’s served in tiny, impossibly white cups and homemade muffins next to a record shop that sold Polaroid film. With lazy mornings spent sipping coffee, earphones on with a Tribe Called Red, as I people watched and let the sunshine warm me through the panes of glass.

I fell in love with a restaurant that feasted with me on dim sum after I emerged from the back alleys of Chinatown, photographing dragon graffiti. With drinking Tsingtao out the bottle, convincing myself that I must really like seafood, as I accidently ordered a dish with lobster, muscles, and eel. Another drink, please.

I fell in love with a man who read the lines I had written convincingly and charmingly, as he made me believe that the White Buffalo I had wrote about was, in fact, him. And after the stage lights went down and the applause ended, I had to realize that my love was as false as the story I wrote, and he wasn’t my White Buffalo … but he would be a great short story. 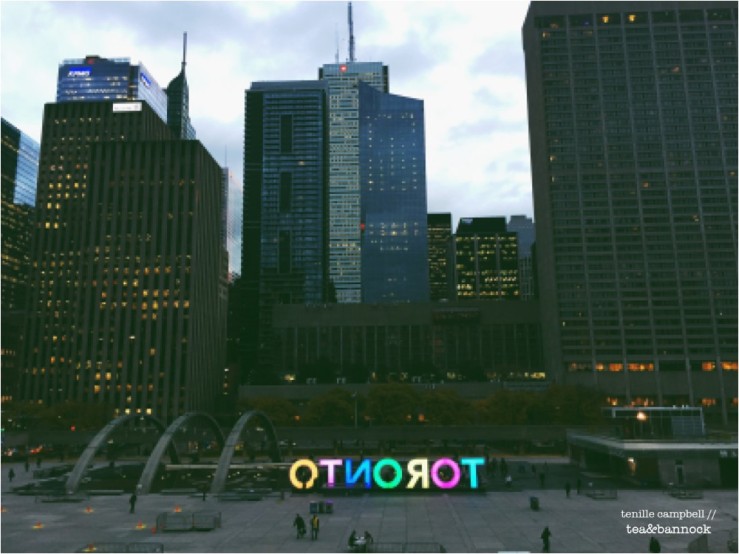 I was in Toronto for the Weesageechak Begins to Dance 29 Arts Festival, put on by Native Earth Performing Arts. Andrea and I had written an Indigenous musical, throwing humour, song and dancing into one hella-funny play (I may be biased) and we were selected for a stage reading.

The actors selected to work with us were amazing and intimidating. Intimidating as in anyone that gets up and wants to perform in front of a crowd – that’s terrifying. Raw and open, not anything I could ever be. I’m thankful for them, though. Their abilities showed us what our story could be, and where we needed to work. They laughed with us, gently criticized the work when it needed, and I was thankful Andrea was there, the cooler head of us, as I react emotionally. Who knew. But really though, it was a productive learning experience, listening to them speak, seeing how accent affects intent, how indigenous language doesn’t always translate so clearly, and trying to explain Cree emphasis when you’re a Dene and a Metis. Ha.

I sipped a lot of latte’s. The first night, I met up with my good friend, Roseanne. We sat in a downtown Starbucks, chatting loudly as people pushed by us and jostled for space. There was more people in that little shop then I have ever seen in all of the Starbucks of Saskatoon.

She and I though, we just get one another. In between chatting about her work and mine, Indian love poems and “moose lips” made for kissing, we laughed and clapped our hands, the loudest ones around. After a 30 minute cuppa that turned into two hours, she drove me to my friends’ house, but not before a mini-impromptu photo session somewhere downtown, in between coffee shops and parking lots.

I watched the skyline of Toronto being bathed in the golden light of sunset and laughed, frustrated. The skyline blocked out all that natural light from hitting us – so how do the Toronto photographers do this?

I adventured. I walked the streets of Kensington Market and tried to decide if this was my haven, or getting too commercial. Instead, I got distracted by vintage goods, tattoo shops and a little shop called Powwow Café.

We were seated in the tiny diner, and I chose the Original Indian Taco, while chatting up with the waitress. Turns out the cook, his Grandma was Anishnaabe, and he had learned from her. I was ready to judge the bannock – me who had eaten Indian tacos coast-to-coast, powwow-to-powwow. Eeeee boy.

And then I could not shut up, moaning out loud with every bite. Because damn. By the end of the meal, which I couldn’t even finish it was so big, I was ready to propose to him. Because bae could cook. Gotta lock that shit up.

Sidenote: It was also at this cafe that I met a reader of our blog, Angela (Hi, Angela!). She is a friend of Caroline’s from way out on the West Coast, and just so happened to be feasting there with her aunt. We started gabbing and she asked, after she caught my name, “are you tea and bannock?” Yasssssssss. I love the connections and kinships that this blog is making, so if you ever see one of us in real life, out and about, say hello. We wanna meet you! 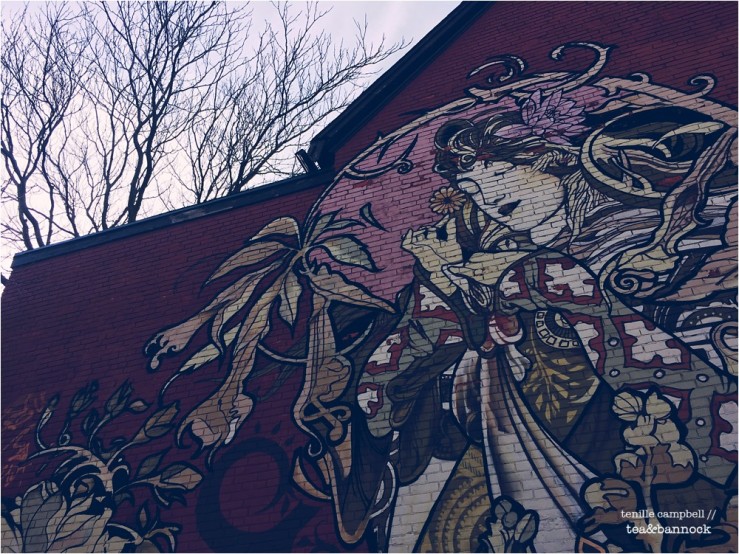 Friday night came quickly. We were hustled into the theatre, lights were lowered and when our play was read out loud, I listened to the crowd. Who laughed and when, what jokes fell flat and who gasped at what. I smiled to myself, not even seeing just the stage and actors, but the potential of what this play could do. I made notes to myself – must learn to sing, must learn how not to be tone-deaf, must learn how to write music. Ha. I watched our characters come alive and saw a few women, besides myself, fall in love with our main man, and I saw the power of our lead female as she sang, and the crowd hushed, listening to the lyrics and message that Andrea had wrote for us.

It’s a good moment when you see your work breathe.

The night ended with drinks and stories. I met Deneh’Cho Thompson and his dramaturge Lindsay Lachance, and noticed my own Dene accent getting thick and strong, like northern tea, the longer we talked. His play, “The Girl who was raised by Wolverine,” wrecked me, and seeing the directorial work of Lindsay made me dream outside my own parameters of creativity, again.

I flirted with my faux-White Buffalo and met storytellers from Australia. I shared a toast with a witty director and shared gossip with the cast from my own play reading. I met strong, powerful and creative women and my heart beat a little faster when they mentioned, “collaboration, we need to do something together.”

And then, it was Saturday morning. And there I was. Sick, achy. Both bemoaning Friday night and giggling about the pick up lines heard and used.

“You make me feel… traditional…”

“Maybe you can teach me how to make bannock too…”

Whaaawhaaaa. My next play is just writing itself.

Before I left the city, my Anishnaabe cousins and I stopped at two different art shows, to meet instagram friends and amazing Indigenous artists, Chief Lady Bird and Auralast.

There is nothing so awkward as introducing yourself by your instagram name:

We chatted about art and photography, business and inspiration. More hugs and selfies. A few goods were bought (support indigenous artists!) and bannock was feasted upon. 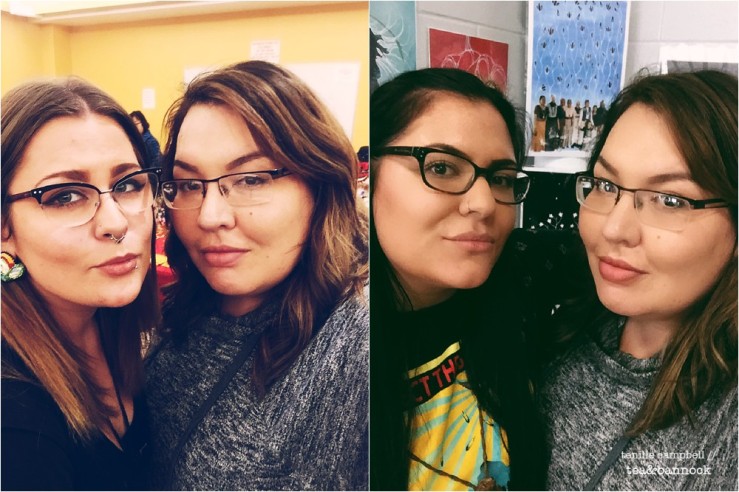 So, Toronto and me, well, it’s like a Tinder hookup, I think. A good time while it’s happening, but full of missteps and awkward moments when you think about it later, giggling with your friends.

Toronto and me, we were like a bannock made healthy with whole wheat flour. A good idea at the time, but you’ll have regrets later.

Either way, I learned my lesson. Keep to the markets and coffeeshops, and you good, Tenille. Stay away from beautiful men offering you stories and potential lines for future books.

I put on my glasses, and then my sunglasses, threw on my hoodie, and sipped Starbucks as me and my cousins drove out to the rez, back to Walpole Island for a visit.

But that’s another story.

4 thoughts on “Rez Baby in the Big City”