This summer, I travelled to the Yukon, Saskatchewan and Toronto throughout June and July and wrote a bit about it here on Tea & Bannock. Now that I’m home for a bit in Ottawa, I’ve been thinking about past Road Trips and how they are an essential part of my summer experience.

Exactly one year ago, I was on possibly one of the best road trips of life. It’s one of those once in a lifetime trips that I still wonder if it actually happened. Good thing there’s pictures to prove that it did!

Background: My cousin Leah and I were roommates when I lived in Saskatoon, and Portlandia became a big part of our lives. Like, it was always on. Constantly. We became obsessed and started memorizing every episode. We closely identified with the Feminist Bookstore characters, Toni and Candace. So much, that we started dressing up as Portlandia characters for Halloween. Don’t judge. 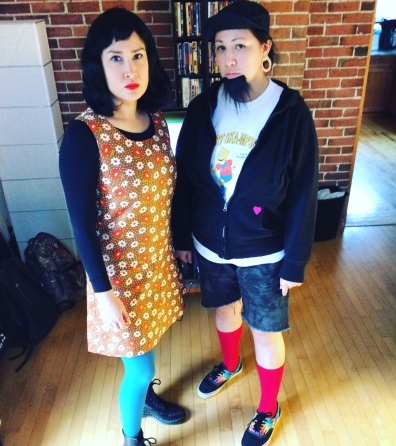 One night after indulging in some health juice, we dared each other to apply to be extras on the show. Nothing much came of it. Fast forward to a year later, I was living in Ottawa, and Leah got an email – she had been accepted as an extra on Portlandia!

We freaked out, I kept checking my email but never got one. We decided to contact them and see if I could go too. Once they gave us the go ahead, I booked a flight to Calgary where we met up to drive the rest of the way to Portland, a dream come true! We even got some local media coverage! We also ran a gofundme campaign which helped us get to Portland, thanks everyone!

We got to see some Portland landmarks and places they have filmed in the show,

We waited patiently for our call time on Saturday Aug. 9, 2015. Everyone was so nice to us, we were known as the cousins from Canada who drove 13 hrs (+ 5 hr flight for me) to be on our favourite show!

I wanted to write about this trip on Tea & Bannock to mark the 1 year anniversary, but also because I wanted to share a lighthearted story about dreams coming true, as cheesy as that sounds. Celebrating silly moments and celebrating friendships is sometimes all we have. I look back on this trip and it gives me life! So often media portrays negative stories about Indigenous people, the fact that this story was picked up by media makes us giggle, but we also see the importance of it. It is my hope that this story lifts others up too! Be yourself! Do what you love and accept who you are, even if it’s being Portlandia fan girls, no shame in that game!