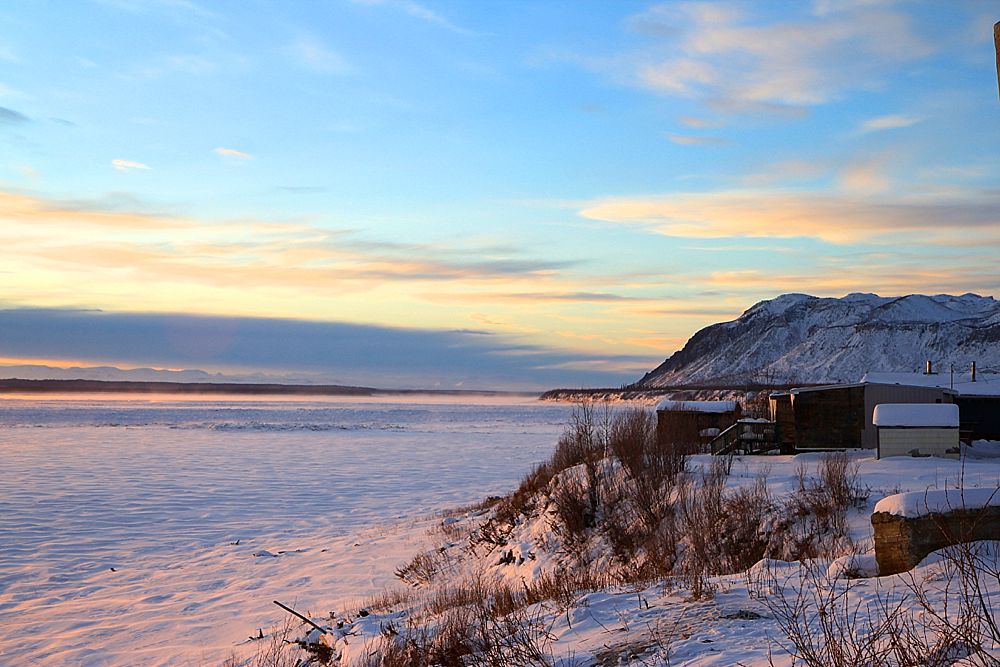 Last week I went to visit the Hamlet of Tulita. I was there to do Inuit and Dene games demonstrations at the Chief Albert Wright School. I had traveled to the community once before, by boat up the Mackenzie River from my hometown community of Fort Providence. It was a memorable and adventurist trip with my family.

Most recently, I visited the community of roughly 500 people twice by plane. I instantly fell in love with the land and community. Tulita is culturally rich, with many of the Dene traditions being practiced to this day and the people are so lovely. I felt welcomed and at home.

Tulita in the Dene language means “where the rivers or waters meet,” and is located in the Sahtu Region of the Northwest Territories. The community is the junction for two rivers; the Mackenzie River and the Great Bear River. Beautiful mountains surround the Hamlet. One mountain that is especially significant to the Dene people is called Bear Rock.

The land of Denendeh (The Land of the People) holds many urban legends of how the North and its landscape came to be. There is a well-known story about Yamoria, a Dene medicine man and the giant beavers that once roamed the earth. I vaguely remember these stories being told by my Slavey teacher back when I was in sharing circle in Grade 2. As children, we were all so attentive and impressed by these stories. I am sharing this story as I remember it, and please note that other storytellers will have their versions as well – that is the joy of stories – they are living, breathing beings.

It is believed that there was a family of giant beavers who were terrorizing the land and killing the Dene people. Yamoria, began chasing the beavers through Great Slave Lake, down the Mackenzie River, and caught up with them at the Great Bear Lake, near Tulita.   Yamoria killed the three giant beavers with a bow and arrow, skinned them and stretched their hides on the Great Bear Rock in Tulita.

To this day, you can still see the oval outline of the beaver pelts on Bear Rock. The two arrows that Yamoria shot are still seen each spring where the Great Bar River and The Mackenzie River Meet – the poles are still sticking out of the river.

There is another story about Yamoria cooking some of the beaver meat by the river and the beaver’s grease dripped into the fire. It is said that the fire continues to burn near Tulita.

People believe that he left Denendeh, paddled up to the Arctic Ocean.

Others believe he is still out there traveling, or he has disappeared completely.

Ask me in person one day, and I will share with you what I believe. But in Tulita, I love the culture, the traditions and the history. It is a community to go and visit any time of the year. I cannot wait until my next visit.

1 thought on “Where The Rivers Meet – Tulita, NT”