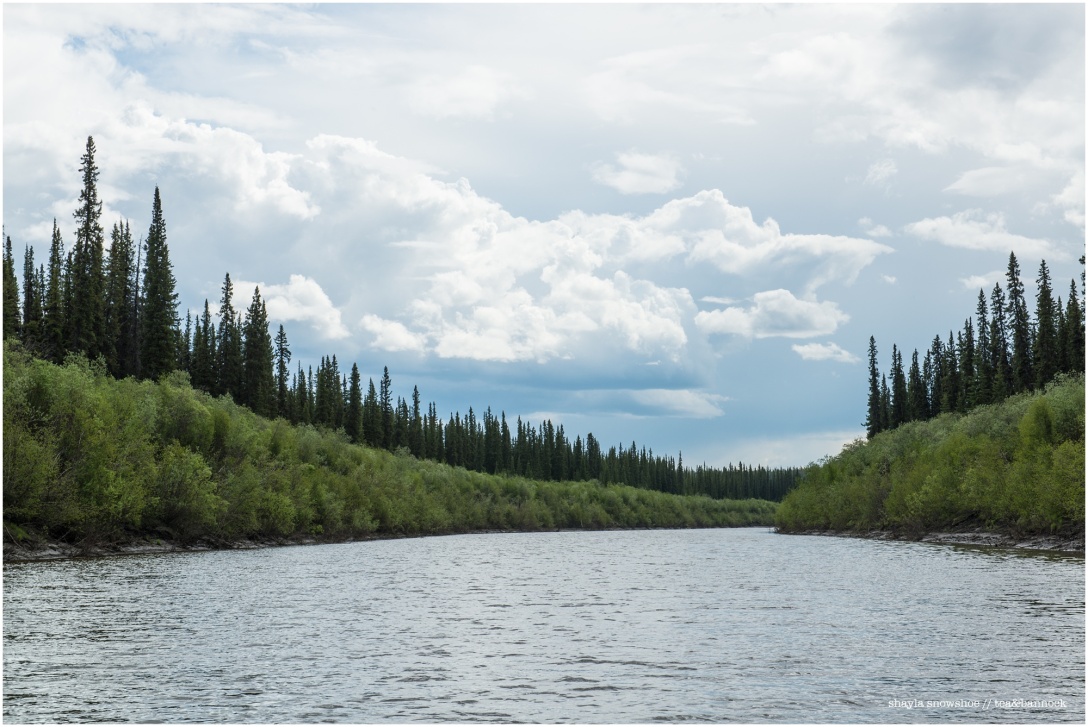 Today, I would like to share a recent project that I conducted through my research position at the University of Alberta. Under the guidance of Dr. Adam Gaudry and the partnership of my Jijuu Mary Effie Snowshoe, I researched the value and importance of place names. I took that research further by reclaiming a traditional place name in the North and then created a poster entailing my research and sharing my findings.

Prior to this project, place names were something that hadn’t even crossed my mind. One main concept that I took away from this project was how we as Indigenous people once had traditional names in our mother tongues for the places that we once resided and still reside to this day.

For example, my home community, which is now called Fort McPherson, was once called Tetlit Zheh. It was only once the settlers and trade routes were formed that the use of “Tetlit Zheh” began to fade and became replaced with “Fort McPherson.”

This is something that we need to think about as Indigenous people: what are we losing when we lose our traditional place names?

Once I finished the research portion of place names, I then located a place on the Gwich’in Place Names and Atlas that wasn’t yet on the map. Together, with my Jijuu Mary Effie, we discovered that “Three Cabin,” the place that she was raised, was not yet on the atlas. So that’s where we started. We began by recording the traditional place name, which I learned and will forever refer to the place as, which is “Tr’inalaii.” We then recorded the story of where Tr’inalaii began and the importance it held in her life.

“My dad was raised at Blackstone in the Yukon, and he decided to move over to the Peel River when he was 19 years old. When he got to Tr’inalaii, my dad thought to himself this is where I need to be. There was wood, and clean, fresh flowing water. It was a good place to trap in the fall for martin, surrounded by lakes and he knew it was good for muskrats and beaver. Moose too. It was moose country. Lots of fish… good fish. We were never stuck. Tr’inalaii had everything. So he settled there and he never left.

Tr’inalaii was important to my dad because he trapped, hunted, fished there… he made his living and he raised his family there. That’s why it was so important to him.” – Mary Effie Snowshoe 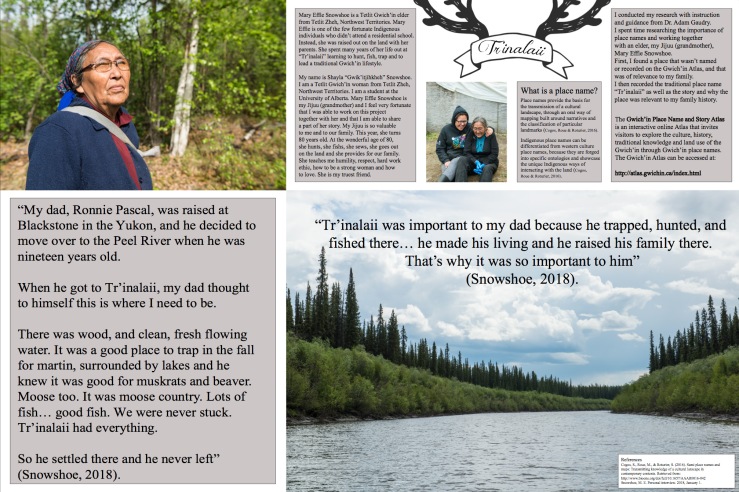 Now, I challenge you to find the traditional place name of your community or city or even your family’s bush camp. Bring back the use of traditional names – they carry a lot of meaning and history. You can soon find this story, along with other traditional place names and their stories at the Gwich’in Place Names and Story Atlas, at http://atlas.gwichin.ca/index.html.