It’s pride season. As a queer Indigenous woman I find this both exciting (the critical mass of fabulousness in one place) and challenging (pink washing) largely because my own sexual and gender identities cannot be separated from my experience as an Indigenous person. Pride may have its roots as a social justice movement, but that movement has been diluted and can so often ring for one note of equality: marriage. I believe the spectrum of sexuality and gender cannot be separated from the spectrum of privilege of class and race. We exist within each simultaneously, which makes it complicated and that is one of the things I would like to see celebrated during Pride, the complicated multi-faceted, intersectional identities that make us each so amazing.

In order to honour Indigenous LGBTQ & Two-Spirit Pride, I sought to photograph the most fabulous, fierce, two-spirit social justice activist Femme I could find (aka a kindred spirit). Enter Shane Sable, Two-Spirit Gitxsan Feminist Burlesque performer and activist.  She’s from the Frog/Raven clan in Cedarvale and while we have not yet found any direct relation – I say give it time, I’m sure we’re at least cousins in law twice removed. Lucky me.

Shane Sable has been performing burlesque for five years now. Having taken a well deserved break, she’s had some time to reflect on her relationship with burlesque and her position as an Indigenous performer within the burlesque community.

The result of this reflection will soon be seen in the creation of an all-native burlesque collective based out of Vancouver BC.

Indigenous women, performing and embracing their sexuality completely on their own terms? #MicDrop

I had to know more. So what started as a fun, spontaneous photo-shoot became an in-depth heart-to-heart about intersectionality, beaded pasties and what reclaiming Indigenous sexual identity can look like in hot, self-actualized and validating action.

JW: What prompted you to consider starting an all-native burlesque troupe?

SS: There are so many reasons! For instance, when I approach many promoters about equity and inclusion, I’m told that their shows are not diverse because there is a lack of performers of colour, or that they simply don’t know any. They keep choosing who they know in their own circles.

If you think your community (any community) is too white, ask yourself WHY THAT IS. This erasure and lack of self-examination is so common and so problematic.

I started by compiling a list of fifteen performers of colour to share with producers, so there was no excuse, but of course even though I shared it. It was rarely considered.

Ironically this is was what has inspired the creation of the Indigenous Burlesque collective. It’s so needed. The list self-populated and was completely optional to join.

How many Indigenous performers signed up?

Seven! And we’re just getting started. That was without much effort. Just here in Vancouver, there are 7 Indigenous performers in the Burlesque community. That just goes to show that there are PLENTY available.

Has the collective come up with any goals?

Yes! We want to amplify and reclaim Indigenous sexuality from the toxic effects of colonization. We realized we do that in some part already, by performing burlesque while Indigenous, but this is not always experienced explicitly by the performers or the audience. We’d like to take on the repossession of our sexuality explicitly, deliberately, unmistakably.

We want Indigenous women to know they have options and the right to express and explore their sexuality as much as any other person. Indigenous women should benefit from the privilege that white women enjoy. Joy and pride in our body, in our appearance, joy in sex. We aren’t easily afforded these things and it’s time to change that.

Who is in the collective?

We come from a wide variety and differing experiences as Indigenous people. But the challenges we experience are very much the same. That was our first conversation as a collective.  We didn’t expect it to be. We got together to talk about creating the collective and found ourselves unpacking the very painful truths about how we’ve each been treated as indigenous women by our partners, our professions, our communities and society. We talked about how we each find connection with our roots, the inter-generational residential school trauma, and what solidarity in relationships can look like. We unpacked the lateral violence we’ve experienced by men and women from within and outside our own communities. We didn’t plan for our first conversation to be so raw, but of course, it had to be.

Is this the first time any of you have had colleagues to unpack your personal and professional experiences?

Does this mean beaded pasties? YES. There are plans. Big plans, and opportunities are coming our way fast! One of our performers has pitched traveling to facilitate empowerment workshops primarily for Indigenous women. We recognize we have a certain amount of privilege to be performers.

I know it’s complicated. There’s no easy path to community for us. I know some other Indigenous women whose gender identity is non-binary. I know we can be criticized for performing burlesque by the Indigenous community – there is alot of shame around Indigenous women’s bodies and sexuality that we need to undo. It is not without it’s challenges or critiques. But this makes sense for us. 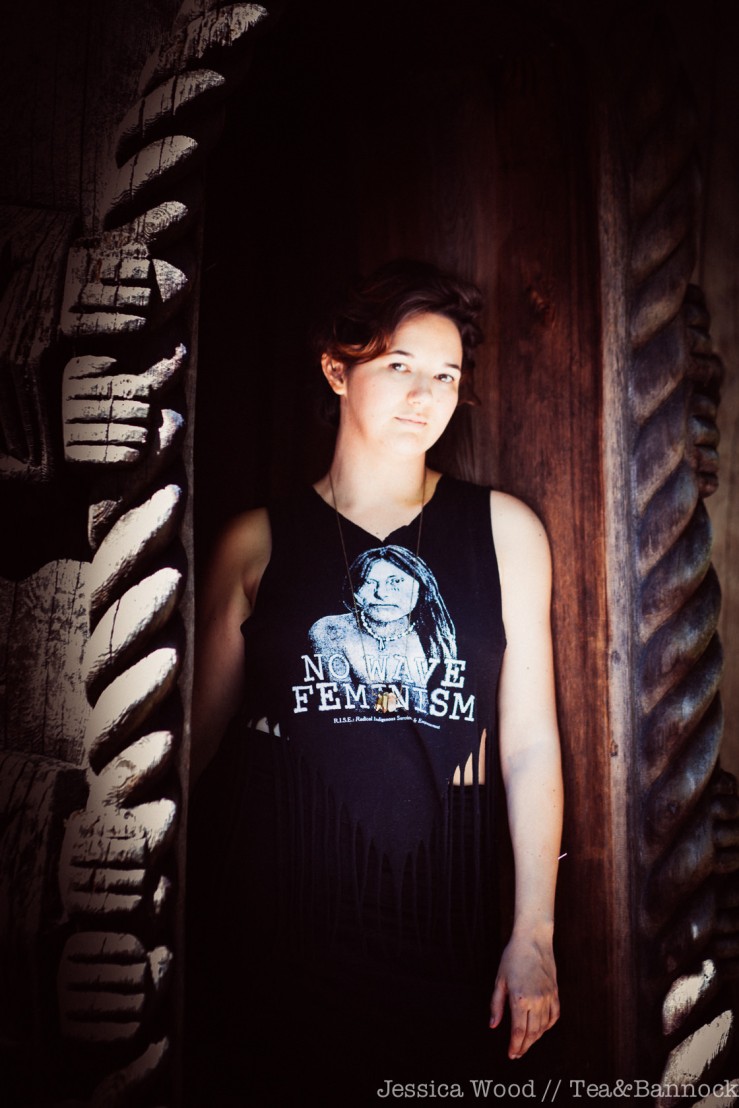 May I ask how you identify?

I guess you could say I’m trying on “two-spirit”. I find it to be a great escape from the colonial baggage of “bi-sexual.” At least this way, when I identify my sexuality as part of my Indigenous identity no one assumes I’m available for a threesome as they do when I said I was bi. It’s gives me some safety to relate my sexuality as something that is part of my Indigenous identity. I appreciate that. White people don’t understand enough about being two-spirit to bring their colonial preconceptions into it.  Truthfully, for me, it’s not about the bits. It’s about the person!

Does your collective have a name?

Not yet! Perhaps the readers at Tea & Bannock can make some suggestions!

And with that T&B readers, we invite you to make suggestions for an empowered, political, fierce, Indigenous burlesque troupe!

* UPDATE: The Indigenous Burlesque Collective has a name:  Virago Nation!

Please note, the Gitxsan performer/ activist/ change agent has changed their stage name since the orginal publication of this post. The post has been updated to reflect this wonderful new chapter in Shane Sable’s artistic practice!

3 thoughts on “No Wave Feminist”