It is a special day of reflection for myself and my husband. Another year has passed and we have survived another year together. You have no idea how difficult it really is being married to me, or being married to my handsome and smart husband for that matter. Seven years ago we were married in front of a quince tree where later I learned that my father put down tobacco and said a prayer for us on our wedding day. My parents marriage ended when I was in grade 7. My mother fled from my father while he was working up in Northern Saskatchewan. She left him for many good reasons but the most important one was to protect my sisters and I. And there we were, twenty years later, my mother, my father and my two younger sisters together to celebrate the union between my husband and I with our 16 month old son by our side. Both of our families and friends were there to witness us, well pretty much growing up.

Around this time last year I shared a post about how my husband and I met. You can read more here https://teaandbannock.com/2016/06/06/kisakihitin-you-are-loved-by-me/

Honestly, I don’t write very much about him on social media or on here because of his profession and out of respect because he is a private man. I still take a lot of photos of him though because I’ve been doing so for nearly 12 years. The thought makes me blush. As a young girl I knew who I was going to marry one day and it happened, even after years of making out with guys from around the world (yessss…. I have an international record and only two of them were indigenous), heartbreaks and just dating baaaad dudes. Oh and I must mention the English lad named Mike Hunt. No joke.

My husband and I are still learning how to be together. I wanted to share with everyone a few questions that I gave my husband for you the readers to get to know me a bit more. And it is a chance for me to see how well he knows me.

Which of my achievements am I most proud of?

– I am worried about answering this question, as I feel that my response may be used to judge me at some future point. But I think that it may be our two sons, because they are pretty amazing and I am proud of them too.

Later in my adult life, I had an epiphany. Which comic book character from my youth did I realize strongly influenced my style?

What is my least favourite housework task?

– Hmmmm… taking out the garbage? or is it dishes? or is it vacuuming? or it is perhaps washing the floors?

Which song do I sing when we argue?

– Witney Houston’s “I will always love you”.

What was yelled at us by total strangers while we where out on our first date at Jericho Beach? Is this too personal sweetheart?

– No, its not too personal. It was: “Hey look, there are some indians making out in the bushes!”

How did I spend my summers as a child?

*Note: this is the ONLY question that he didn’t answer correct. Yes, every year we went to the Back to Batoche Days but my fondest memories are of spending time with my mom’s family in Melfort and camping & fishing with my dad’s family in Northern Saskatchewan.

What kind of footwear was I wearing at our wedding during our first dance?

When shouldn’t you talk to me?

– Anytime in the morning, before you have had a coffee.

Which of your shirts do I dislike?

– You dislike one of my shirts?

What kind of food makes me drool? Note: I considered leaving you and Elijah because neither of you like it but quickly realized it meant more for me.

Why do I take so much time to get ready?

– Because you have a double XX chromosome.

What song can always make me dance, especially when no one’s around?

– I have no idea. I obviously am not around when you are dancing to it.

What’s a personality trait I dislike about myself, and I share with a parent?

– Anything that your mother does that annoys you.

Am I related to Louise Riel?

Are you related to Louis Riel?

When we hug what do our kids and dogs do?

– Try to get in the middle and break up our hug. 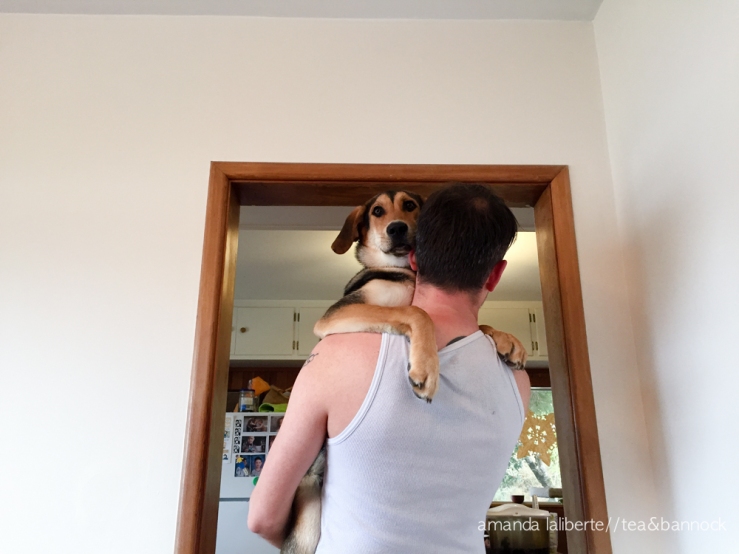 What made me fall in love with you?

– Uhhh…hmmm… my cowboy boots? or my sweet personality? No, it was totally the cowboy boots.

You did good my  husband. xox